The Idea of Disegno in the Renaissance

Not Your Average "Academic" Drawing...
​ 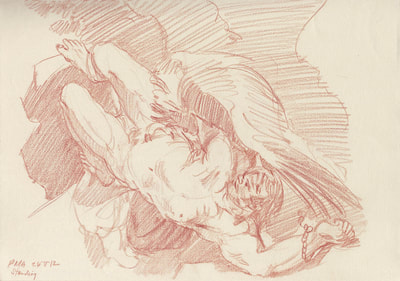 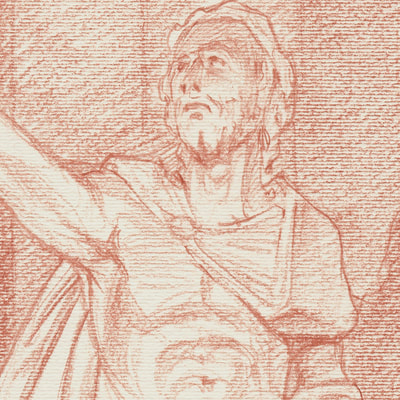 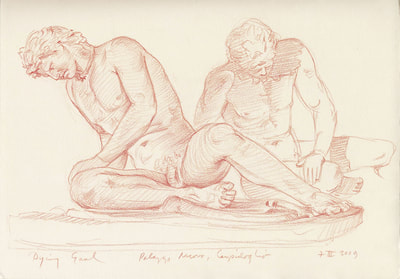 Drawing as it was perfected in the Renaissance was both a manual and an intellectual operation. The word disegno meant both drawing and design, and in that sense conflated the two: one drew to design, but one also implicitly designed (conceived) as one drew. The manual facilitated the intellectual, but the intellectual informed the manual as well. To draw was to think. Giorgio Vasari said drawings best reveal the mind of the artist at work. The reason they did so was because Renaissance artists not only perfected the precision of drawing, they invested it with energy. That energy came from a certain speed. Drawing with intensity, with urgency, invested the drawing with life, which conveyed a more immediate sense of the artist's idea.

That's why the mark, the gesture, the pen or pencil stroke, is so important a part of Renaissance drawing, and makes it so different from the laborious—maybe even tedious—academic drawings of the nineteenth-century French tradition. A Renaissance drawing is meant to be seen as a drawing, a set of marks of paper, not the equivalent of a black and white photograph. One can also see it as an act, because the process by which it was made is evident (whether Raphael's sanguine strokes or Michelangelo's pen and ink hatches). The value of studying exemplary figures, and in drawing from life, was to shape the memory, not to produce a documentation of the subject for its own sake. One draws in the Renaissance tradition to remember, because Memory (Mnemosyne) was mythically the mother of the Muses.

Read a Getty blog about the Renaissance tradition of drawing after sculpture...
Summer 2020
But above all, the best thing is to draw men and women from the nude and thus fix in the memory by constant exercise the muscles of the torso, back, legs, arms, and knees, with the bones underneath. Then one may be sure that through much study attitudes in any position can be drawn by help of the imagination without one’s having the living forms in view.
Giorgio Vasari, Vasari on Technique, trans. L. S. Maclehose, Dover Publ., p. 210

After the careful training in the workshop—the copying of other artists’ paintings, copying of ancient marbles, studying the nude from life, making clay models, making caricatures and studying man’s physiognomy, making games of the pen to keep up one’s manual dexterity, making compositional studies, working out details of limbs and draperies and the fall of light—the artist was at the final step in the execution of the painting. The result never betrays the work that went into it. That many of these preparatory studies were a means to a higher end is evident from the disregard for preservation of their drawings: the artist Mastelletta rescued a drawing by Agostino [Carracci] that the latter was about to use to clean out a frying pan.
Diane de Grazia, “Drawings as a Means to an End: Preparatory Methods in the Carracci School,” The Craft of Art: Originality and Industry in the Italian Renaissance and Baroque Workshop, eds. Ladis and Wood, Univ. of Georgia, 1995, p. 173

When asked by Guercino whom he used for the faces of the Magdalen and the Madonna, [Guido] Reni is said to have sat his ugly assistant down and while looking at him drew a beautiful face, replying that it was necessary to have a concept of beauty in one’s head and then any model would do.
de Grazia, p. 179 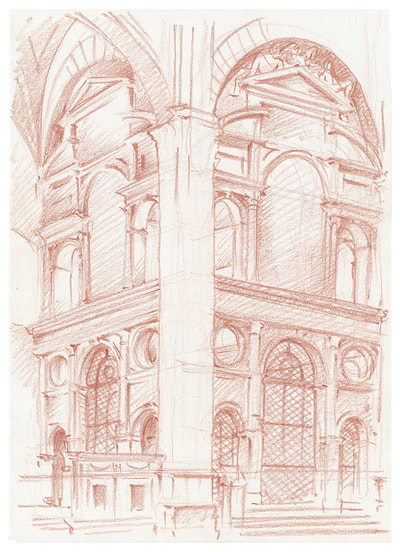 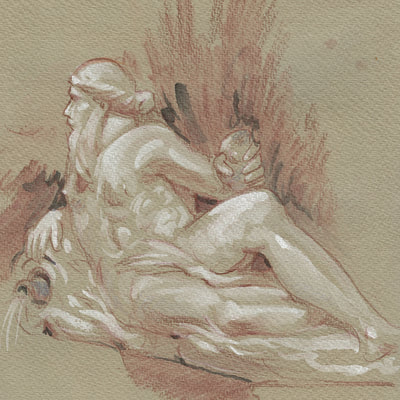 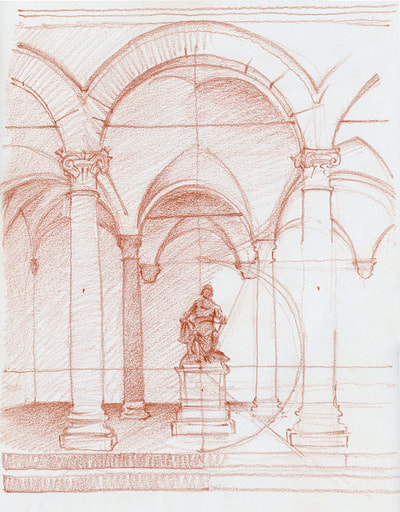 Having Some Perspective is Fundamental​

Leonardo da Vinci called perspective "the bridle and rudder of painting." Without a command of perspectival space, the human figure has nowhere to go. With a command of perspective artists can imagine space and populate it with figures. Perspective allowed mural painters to extend real space into fictive space. In a world where the ability to document the world in perspective was linked to the design of a world ordered perspectively, the boundary between illusion—whether in drawings an paintings, or on stage—was imaginatively blurred.

We are offering an intensive workshop on drawing in the field in perspective for anyone who wants to refine their skills in this fundamental technique.

Drawing in the Renaissance was usually a means toward some other end. One of the most important ends was fresco painting. Because fresco demands speed and sureness of touch, drawing in preparation for fresco was invested with a similar energy. From the primo pensiero, or the first idea that Vasari prized so highly as a window into the artist's mind and a sign of lively investigation, to the modello presented to a patron, often then squared up for transfer, to the full size "cartoon" to be transferred onto the wall, drawings were both careful and effective. Since artists were expected to work ambitiously on the wall (and were often juggling multiple projects with many figures), fresco artists drew with a sense of urgency—not carelessness, but with the economy of gesture that comes from pushing oneself to do more, and more quickly. Never fussy or fastidious, Renaissance preparatory drawings for frescoes are confident exercises in description of often moving forms in light.

The Tuscan Renaissance Academy endorses this original academic kind of drawing. We offered the Renaissance approach in 2019. 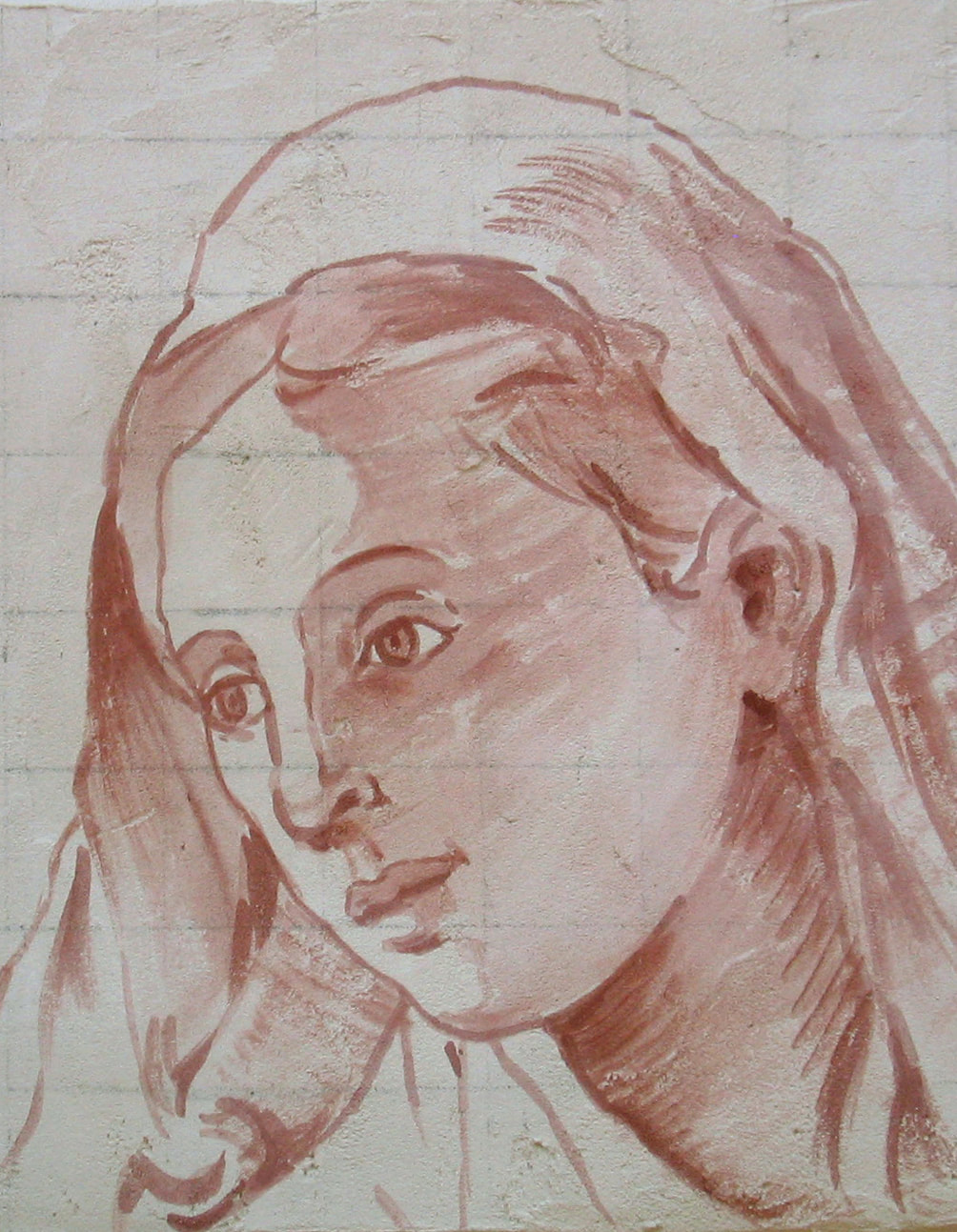 The Problem with the Sight-Size Method

Most realist, and so-called "classical realist," schools and academies teach the sight-size method. Essentially a nineteenth-century French Realist technique, it depends on the accurate copying of a subject at the same size on a drawing or canvas. It is essentially a mechanical, measuring technique. It is not the way Renaissance artists drew; and throughout the eighteenth century, artists continued to draw on a surface that was not set up to parallel the subject they were drawing. Images of artists at work copying other works of art, or a subject in the field, show the artist working often on a portfolio on his or her lap, propped up on a chair or other support, etc.(see the Getty blog post cited above). By constantly looking away from the subject to the drawing, the artist was slowly, progressively training the memory. And what one was after was not the transcription of a form onto a two-dimensional surface, but a training of the judgment toward the ability to invent a scene or figure. Sight-size is not a Renaissance technique, even though it may be "traditional," in the sense that it's been done for over a century. We at the Tuscan Renaissance Academy teach a Renaissance approach to drawing.