A Renaissance Garden for
​Villa Guinigi 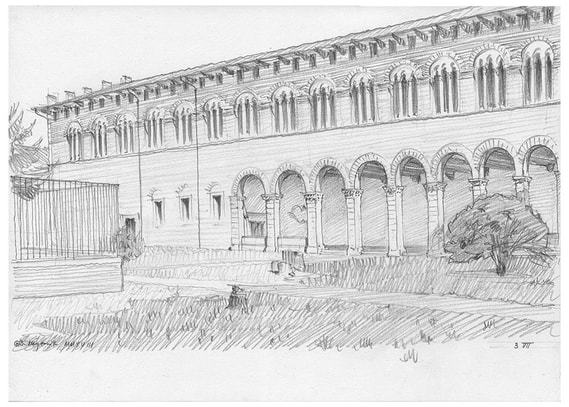 Villa Guinigi, actual state as seen from via della Quarquonia; drawing done on site by David Mayernik
Built for the wealthy Paolo Guinigi, whose wife Ilaria del Carretto is immortalized in Jacopo della Quercia's famous tomb monument (originally across the street in S. Francesco, now in the Cathedral), what distinguishes this elegant late Gothic building are its symmetry, regularly spaced windows, open loggia, and its broad proportions. These qualities, albeit articulated with Gothic details, are harbingers of Renaissance form and order.

As a villa, a retreat from the city, the building functioned as a kind of screen between two gardens, front and back. The loggia, eight bays wide, acted as both a filter and a transitional element between outside and inside. Toward the north (the current entry side, shown here), the villa was preceded by a fountain on axis (therefore centered on the middle pier of the loggia), flanked by four rectangular parterres, two on each side of the axis. The bones of this organization still exist, without the fountain, and the plantings rather desiccated. It only requires a little imagination to picture how the old garden might have looked, and how it might transform the perception of the building for passersby.

Imaginary reconstruction of the garden by David Mayernik

Fleshing out a Garden: The Bones of an Idea 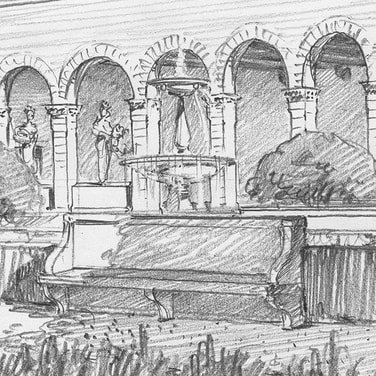 Renaissance gardens were characterized by rather simple formal structures (some variation on a grid), articulated by a similarly simple palette of materials: hedges in box and ilex or holly, pedestals, fountains, and benches, potted plants (often citrus), specimen plants (herbal and/or medicinal), trees for structure and focus. With an abundance of evergreens, gardens remained verdant throughout the year. They provided shade and the psychologically cooling effects of water in summer, and color in winter. As extensions of the formal order of the house, the villa garden functioned as a series of outdoor rooms whose geometric order spoke to the artefice of the human perfecting of Nature. They were places of reflection and serenity, but also of performance and spectacle. ​

Our re-creation builds on what remains of the garden's structure, bordering the current grass plots with hedge, focused internally on subdivided plots of specimen herbs and a few flowers, with benches to allow a bit of repose. The central axis, approached by a proper gate reached from a more compact forecourt, is flanked by pedestals at the corners of the parterres and focused on a two-tier fountain. Statues of the Four Seasons fill the outer loggia bays, perched on the existing parapet walls. 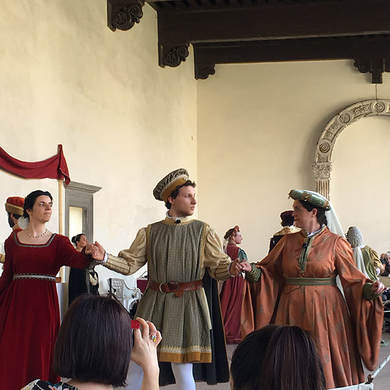 Renaissance dancers under the loggia of Villa Guinigi; photo by Brette A. Jackson
The Compagnia Balestrieri di Lucca (Lucca Crossbow Guild) supports a Renaissance Dance troupe, often performing as part of the city's cycle of events and feast days. Informed by assiduous study of dance, costume, music, and courtly life, they bring to life the scenes from frescoes and illuminated manuscripts.

The Power of Drawing

Drawing is both a means of studying the past and a way of imagining the future. Rooted in perspective, Renaissance drawing was the basis for all the arts, the essential skill that facilitated the other half of the dual meaning of disegno—design. Our Academy disseminates the idea of disegno as the Renaissance understood it. Read more here about that approach.